The shift to remote work during the pandemic has proven that knowledge workers can be productive from most anywhere so long as they have reliable internet. That has made what was already a competitive job market even more challenging, said Victoria McGlone, COO of the Kanata North Business Association (KNBA).

“It’s no secret that talent is definitely in short supply in the park today – DiscoverTechnata.com has over 900 open roles,” McGlone said. “Expect that to double post-COVID. When we go to the community and ask member companies what the number one thing is keeping them awake at night, the answer is all about talent.”

KNBA represents the Kanata North business park, which is charting an ambitious future as a hotbed of innovation, collaboration and growth for Canada’s next generation of anchor technology companies. But the best intellectual property in the world is of little value without the talent and the capital to bring it to market.

That’s why the KNBA is working with select partners to launch Hub350 later this fall.

“The aim and the vision of Hub350 is for it to serve as the gateway to Canada’s largest tech park,” McGlone said. “How do we connect the 540 companies that are here to talent, capital, success and growth?”

The 12,000-square-foot hub is located at 350 Legget Dr., an address steeped in Kanata North’s tech history with Mitel.

Attracting knowledge workers to Kanata North and keeping them here begins with post-secondary institutions. Local schools have long invested in Kanata North – Algonquin College, University of Ottawa and Carleton University. In fact, uOttawa recently announced its partnership with Wesley Clover and L-SPARK to create Alacrity Ottawa, to mould entrepreneurial engineering students into company founders … who would then need talented individuals to build their teams. Carleton has also just signed on to be a partner in Hub350.

But Hub350 has much broader ambitions outside of these local partners. Given the fluidity created by a hybrid work model, any school anywhere can conceivably become part of Hub350, to help their bright young minds remotely connect with new career opportunities outside of their home city (or even country) without having to move. Names like Harvard, Oxford, Cambridge and Yale.

“How do we soft-land these top tier post-secondary institutions into Canada’s largest tech park?” McGlone said.

What some people may not realize is that there is another institution a couple hours away that has also long been active with the Kanata North community – Queen’s University in Kingston.

Queen’s, through its Partnerships and Innovation (QPI) office, recently signed on as a Hub350 partner. This builds on its existing local partnerships with L-SPARK, Invest Ottawa, uOttawa, Carleton and others. 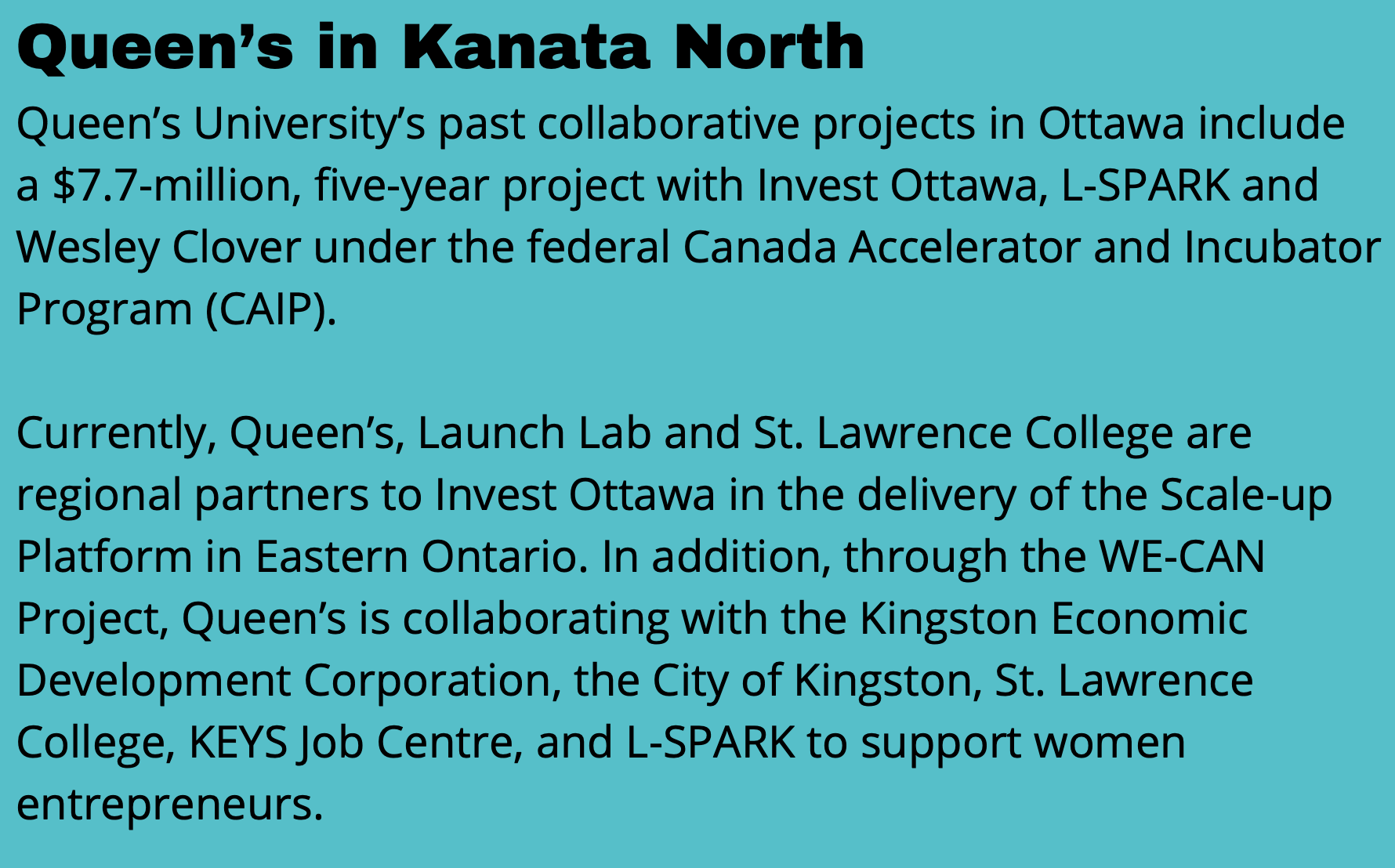 QPI develops and facilitates partnerships both nationally and internationally to advance Queen’s research enterprise, promote the commercialization and protection of inventions, enhance social impact, and strengthen the regional innovation ecosystem.

By “regional innovation ecosystem,” Queen’s has its eye set on the continued development of the Eastern Ontario Innovation Corridor (EOIC). This initiative showcases how communities across Eastern Ontario are increasingly working together to benefit, not only this area of the province, but all of Canada.

“Kingston is largely a university town, but we have a strong and growing startup community,” said Shoma Sinha, partnerships development officer at Queen’s. “We have a lot of budding entrepreneurs who are really starting to establish themselves and we want to promote that by giving them the opportunity to connect with larger ecosystems.”

While the details are still being ironed out, Queen’s does plan to have an in-person presence at Hub350 as part of its strategy to encourage more grads to build a career in Eastern Ontario rather than heading elsewhere.

“Hub350 is a such an important piece,” Sinha said. “With the clustering of so many tech companies together it is so much easier to promote potential careers for both young talent and our senior talent … making them aware of these opportunities close to home is important.”

McGlone adds that there is more to the post-secondary equation than not just connecting students and grads with a great job.

But industry and academia are only two legs on a tripod. The third and equally important one is financing – the capital to launch, grow and scale a company. Attracting more equity and institutional investors to set up shop in Kanata North and become intimately familiar with the local ecosystem is also a key part of Hub350’s agenda.

In mid-July, Royal Bank of Canada was the first banking institution to announce it would become an “anchor financial sponsor” for Hub350. For McGlone, it’s critical to have such investors present in the park so that founders don’t have to head south of the border for capital.

“When you look at Silicon Valley, it has done such a good job of creating that tripod,” she said.

0 0 0 0 0
Previous ArticleKanata North tech recruiting helping to fuel post-pandemic growth in city’s tech sector
Next ArticleAlacrity Ottawa: ‘This is about building an innovation village’
Sign Up Below to Get News, Updates & Articles Straight to Your Inbox
Latest Posts