Why RBR is paying its employees to commute to work

Every time Greg Johnson, president of RBR, rides his bike to work he hits a crossroad.

“I usually get as far as the coffee shop in Stittsville called ‘Quitters’,” he said. “And I have a long pause at that point as to whether I should follow its advice.” To be fair, Johnson’s commute is 45 km, one-way.

Fortunately for the RBR cyclists who have a shorter commute, they’re getting paid to hop on their bikes in the morning. Since May, the company’s Greener Commuting Incentive Program has been paying cyclists $0.50 per kilometre, carpoolers $50 per week toward gas, and giving public transit users a free monthly pass. 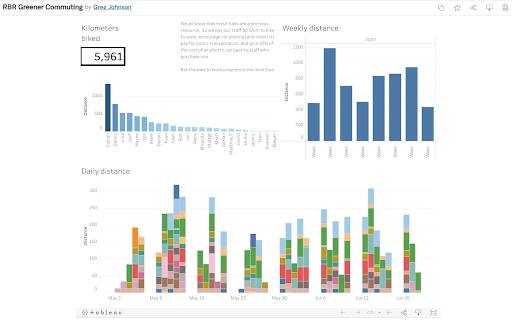 He can pull these numbers quickly because they’ve been tracking kilometres since the program started.

The RBR philosophy: ‘Why not?’

Maybe that’s why RBR tends to attract people who aren’t fans of the status quo.

So far his employees have spearheaded a composting program as well as installing bike racks inside the office when they hit their parking limit outside — the landlord eventually used their design to install more.

Take care of your employees like you do your customers

Whatever the reason for their employee’s creativity, the way RBR supports their staff is working. Their employees actually prefer going to the office over working from home.

“There’s no way you’re going to run a company that’s only for your customers and ignore the needs of your staff. Both communities need attention,” said Johnson. “We find those friction points and get rid of them like we do for our customers.”

In addition to valuing their employees, another secret to their success is keeping things simple.

“We thought of the Greener Commuting Incentive Program in a leadership team meeting on a Wednesday afternoon,” said Johnson. “During the meeting we worked it out on the whiteboard, told the staff the day after, and started paying out the Monday afterwards.”

“It’s easy to do, anybody can do it. We did a viz for it, because it’s easy for us,” said Johnson. “But you could do this on a piece of paper.”

In spite of the challenges Johnson faces on his own bike commute, it’s clear he has no intention of quitting on his employees.